To bring to life...
all those stray, abandoned, wispy thoughts that are continually taking form of some story...
all those stories... which don't get to see the light of the day just 'cos they aren't big enough to fit the standards...

Accusing Eyes. Questioning Eyes. She saw none of them. She kept staring at the ceiling above.

“What should I do? I am so weak and pathetic...” G fell down on his knees and bursts into tears.

“Stand up brother, stand up. You are frail and famished. You need some rest. I will bring some food and water for you. Here lie down.” The monk laid a fainted G on the stony floor and went outside.

“ah... what? Haah!” G regains his consciousness to find that the night has already been fallen. And there is a congregation of monks in the room chanting prayers in the dim candle light.

“Here some food and water to help you revitalize your energy” says the monks.

“What are these people saying?” says G, perplexed on seeing the monks chanting.

“The brothers are praying for you.”

“It’s not me who need the prayers” says G scornfully.

“Everybody need prayers” helping G to sit down.

“My beloved, my life, my world, she is struggling for her life” G again starts sobbing right after his first morsel, Food still in his mouth and some of it leaking down.

“You must act strong. God help them, who love and be strong for that” said the monk offering him water.

“Will God help me?” G clinches monk’s arms “will you help me?”

“I can help you as much as god has made me able to” says monk gently acquitting G’s firm grip and engulf his hands over G’s.

“Chant some mantras, cast some spell, use your magical powers but save her, please! I beg you... Emancipate me from this dread” G shrieks.

“I am just a monk brother. I am not God with miracles, or a wizard with magical powers, but I’ll pray... I’ll pray for you, for her and for your love. To give you strength in eluding your fear for your loss.” said monk in absolute certainty.

“What do you know about love and fear of losing that love, haanh?” G asked infuriatingly.

“I am here only because of Love, Loss and Fear, Brother” says the monk placing his steady hand on G’s forehead.

G’s face becomes relaxed. His eyes get shutting slowly as if they were falling freely.

G opens his eyes after a chronic meditation. He is with a shaved head, in monk’s all white attire and a beads’ necklace. He relinquishes his Padamaasan to rise. He then walks towards the river bank in the mountains with an intense thought.

“The river is peaceful today.” He said to himself and bends down to drink some water.
He looks at his reflection. He is the same monk.

“I didn’t recognize you that day. How could I, I was in a dreadful melancholy. If you hadn’t been there that day for my help I wouldn’t had known LOVE and to let go of the FEAR. I am at peace now. Thanks and pray to you brother.”

G rise up to look at the cloudy sky and then...

MINA BECAME A VEGETARIAN sometime during college, which we saw as a step towards slow progression towards her religious observance.  In explaining her decisions she pointed out the provisions meat eating:  the calf has to be healthy no injuries, the slaughter has to be done in the quickest and most painless manner, and several other points to be taken care of. If so many guidelines were to be followed to serve the ethical treatment of animal that was fated to die, she reasoned it just did not seem worth it. She lived her life the way she believed God intended.

Aleem’s background was also religious. Although no one ever met him, he was in his twenties like Mina, like her he too had a strong sense of community. He likely gave part of his construction worker’s salary to charity in accordance with his religion. His life was never easy, but he knew if just lived it as he believed God intended, he would be justly rewarded.

One February Morning, Aleem boarded a public bus with a bomb and killed himself, Mina and twenty + others in the bus.

Mina’s work with homeless and hungry, her volunteer to teach in a public school, her passion for the quality of the natural environment, and we wonder why such thing happened to her. Aleem on the other hand involved in a militant group accounting for their own individual perspective of freedom, also the one group that provides support and shelter to the poor and needy when local government falls short. Both of them somehow ended up in the same place, doing the similar things. Mina, through no doing of her own, had become Aleem’s enemy. And he killed her.

Certainly religion accounts for differences of world views of its adherents, but do these differences disqualify for the possibility any common ethical denominator? We would often wonder how someone so frustrated with poor quality of life can marginalize the value of other human life so violently.

The absence of the actual real teachings of individual religion now has transformed regional wars which were earlier into religious based wars now which are a fearful sight for our generations. Many such stories still go unnoticed.

P.S (This story is inspired from a book called An Ethical Compass)

Rashmi for the first time failed in her life in 8th standard, in mathematics. She was taken aback as she looked at her score card. She thought of herself as an average student but this one failure made her feel so pathetic. She lost all her confidence. At night, she was lying in her bed numb for whole night. She got up at 4am, passed by parents’ room & overheard her father saying to her mother,

“Rashmi has disappointed me for the first time in life. I never asked my children to top and secure highest grades, but passing is the least I expect from them. Couldn’t they give me back this little, in return of the efforts I’m making to educate them. Our father didn’t have enough money to educate us, and here, I’m trying to educate them but they ain’t willing to, may be, I don’t know! What? And Why?”

Rashmi eavesdropped her father and tears rolled down her cheeks. She knew she had disappointed her parents. She went on the terrace, cried for long. She made a promise to herself that she’ll never disappoint her family again, in her whole life, never let them down.

She worked hard for compartment and passed. Later when she went to school, she felt embarrassed in her class to share her result with her friends. Though a few more got compartment, but they were habitual to it, but Rashmi was not.

The feared from failing again, she dreaded it. She knew she won’t be able to take the pains of failing ever again in her life, this fear of failure gave her strength to work hard all her life.

After a hard day’s work, Graham was tired and only wanted to get on the train to be back home. He lived in Poughkeepsie and yet traveled to the city of New York almost every day, making his daily commute of more than two hours on both side.

He was very late that night and had to board the last train on the metro north, the same train which was called “The Haunted express” due to some unexplained deaths, which had been noted & covered by the ever watchful yet useless media.

Graham, like every night climbed aboard the train, took a corner seat in the empty compartment & drowned himself in his book. He liked reading and made sure that he carried a book every day, so that he could read on his long way back home.

It was only three quarters of an hour later that he noticed a very beautiful woman sitting a couple of seats away from him. Her beauty was beguiling, with blue eyes like that of the sky and blonde hair that resembled a streak of gold.

“Quite late for a pretty lady to travel” He said, trying to start a conversation.

“And you’re not even least bit afraid, to travel alone in the Haunted express, that’s admirable” he said making a pass.

“Are you not afraid?” she asked.

“Of course I don’t fear something that doesn’t exist”

“Fear is something horrible, an atrocious sensation, a sort of decomposition of the soul, a terrible spasm of brain and heart, the very memory of which brings a shudder of anguish.” All of sudden she said in anger.

She walked up to him, looked him in his eye and said, “Real fear is a sort of reminiscence of fantastic terror of the past”

By the time she kept quiet, he reeked of fear. His heart rate had started to rise.
She smiled and said, “New Hamburg has arrived, time for me to go.”

A flash of light, a momentary disturbance to his vision and she had disappeared.

Next day the tabloids read “The Haunted Train claims another Victim – Graham Cole, a Poughkeepsie resident, found dead in a compartment alone with a book titled – Rise of the dead.”

Theme For The Upcoming Week : FAITH 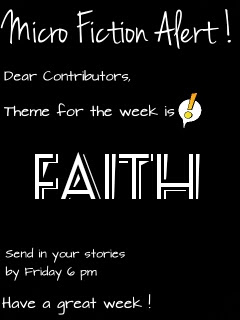 If you liked what you read, you may like these too...